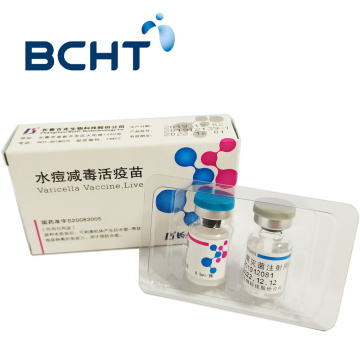 Varicella Vaccine(Live) > Varicella Vaccine Finished Products > Varicella vaccine before 12 months
The incidence rate of chicken pox is the highest in the vaccine preventable infectious diseases, and is often prevalent in kindergartens and schools. It has become one of the serious public health problems. At present, domestic chickenpox vaccine has basically met the needs of children's routine immunization service with one dose. Foreign research and experience show that two doses of high-level varicella vaccine coverage rate can effectively block the spread of varicella, so as to control and even eliminate varicella.

Invested by Changchun High-technology Industry Development Property (Group), BCHT was established in March 2004. This company is a high-tech enterprise engaged in research, development, production and marketing of biologics and drugs. BCHT now owns four manufacturing sites which cover 235,000 square meters in total and two R&D centers for vaccine and drug with the most equipped laboratories and pilot plants in an area of more than 5,000 square meters. In the last few years, BCHT`s R&D investment exceeds more than 120 million RMB.

In 2008, BCHT successfully launched its Varicella Vaccine, Live in China. In the following years, BCHT has continuously committed to improving the product and finally removed the gelatin from adjuvant and extended the vaccine shelf-life up to 36 months which is the longest in the world in 2011. These improvements not only enhanced the vaccine safety and quality but also established BCHT's leading position in varicella vaccine sector.

As a subsidiary of BCHT, Jilin Maifeng Biopharmaceutical Co., Ltd. is devoted to mostly R&D in high density cell culture technique and its application for large scale production. Jilin Maifeng is the first company to develop and apply the self-developed microcarrier bioreactor technology to produce rabies vaccine for human use.

On 25 June 2021, BCHT formally became a listed company in science and technology innovation board in Shanghai Stock Exchange, which is another milestone in the history of BCHT.

Email to this supplier